Well, after Day 3, we all needed a little domesticity, so Day 4 started a little slow.  We didn’t leave the flat until after noon!  But that didn’t keep us from finding coolness in the city.

Yes, you read that right – subway/metro station.  Let me say this about Paris – art. is. everywhere.  On the walls, on the streets, in the shop windows, everywhere.  You can’t see it in this photo, but this station is done in steam punk style.  Can you think of anything cooler to do with a metro station than turn it into an art exhibit?  Neither can I.  Way to go, Paris.  Way to go.

Our next destination was Marais – the Swamp.  I’d been told to visit this place without even knowing what it was, and we’ve gone there twice already as of Day 4.  It’s lovely, full of shops with cute clothes (none of which would ever fit me, but a girl can dream) and well-dressed men (though that isn’t exclusive to Marais).  Today’s find, though, was the Musée Carnavalet.

By the way, aren’t you impressed that I can make accents on my words now?  Je t’aime, Mac.

Anyway, the Carnavalet might be the only free museum in the city.  It’s a trove of goodies about French history.  By the end my brain was in a puddle on the floor from trying to translate the French, but there we so many little gems in this place!  Like this fabulous sign: 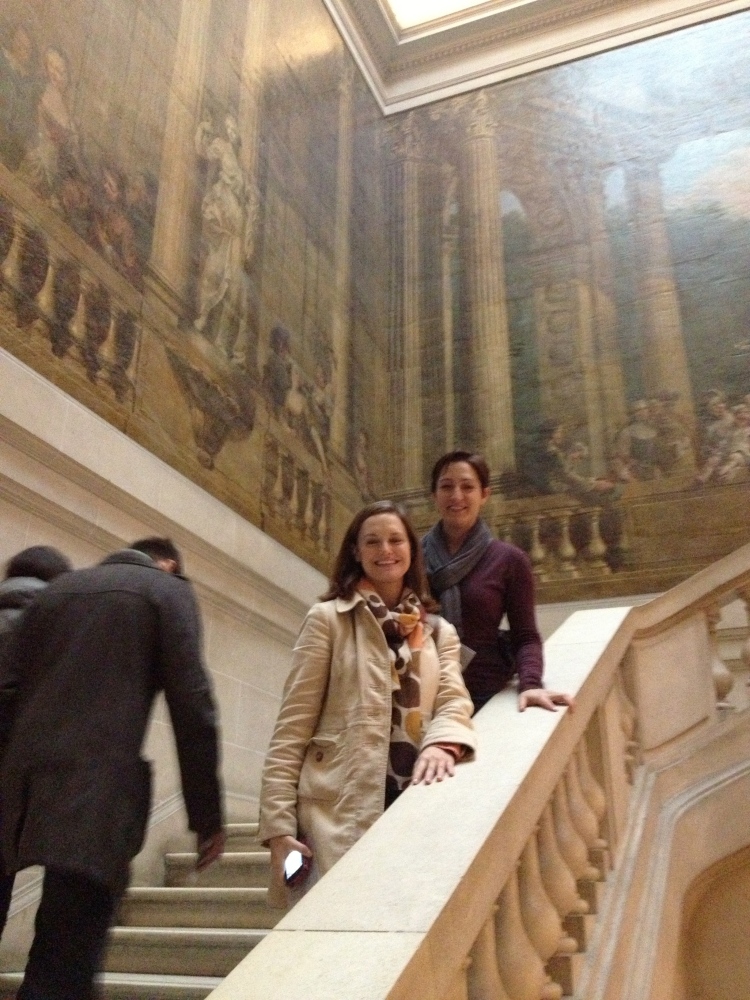 Very cool.  After this, we needed sustenance, and found our way to a little hole in the wall restaurant where we ate comfort food and enjoyed some lovely white wine.  More than the wine, however, we enjoyed our charming and slightly clumsy waiter, who gave us extra wine and said things like “my heart is in America”…brilliant.  But his best line came after he explained that in France single people are taxed for being single (use your best French accent):  “I called the French president and said “Find me a woman!  It’s not my fault I can’t find one, so why should I be punished?”

We then attempted, for the second time, to go to the Dali exhibit at Centre Pompidou.  Turns out our Jenn is quite the handy gal to have around; her VIP pass got us nearly free tickets and we zipped past a 45-minute line.  I have one word for Dali – weird.  I was actually most drawn to Queue daronde et violoncelles, a 1983 painting that made at least a little sense to me.

Then we zipped over to Théåtre de la Ville for a one man dance show – Akram Kahn’s DESH – I know I’ve been saying this a lot, but it was amazing.  Gorgeous, emotional and lush – not what I’d expect from a one man show.

Finally, it was back to the flat for wine, foie gras and chat with Jenn’s friends and roommates.  It’s worth pointing out that I have drunk more wine in these 4 days than I have in weeks back in America.  But it’s good wine – not a lot of preservatives and thus, no headaches the next day!  Vive la France.

One thought on “Day 4 in Paris”