One of the more tragic events in my life, relatively speaking, happened in 1994.  It was sometime in late winter, at the end of the high school basketball season in NH.  Tournament time, baby, and for the first time in my high school sports career, it seemed like we might get to the finals of something.  See, we had my friend Lanette, who was a star and broke all kinds of records in our albeit small conference.  She was tall, athletic, a great shooter, and really damn nice to boot, which made her about the best teammate you could have.

I, at this time in my life, was not tall, just an ok player, slow on my feet and only a sporadic shooter, but I was good for a bunch of assists each game, and generally was a steady person to have on the court.  There were three of us seniors who’d played together for years, and after always losing in the volleyball semi finals, we had our sights set on a championship game in basketball.

It was the night before the semi-finals, towards the end of practice.  I, in a rare feat of anticipatory defense, spotted an incoming pass and leaped to intercept it.  Given that my leaping ability isn’t that great, I didn’t expect to come down hard and find myself on the floor, wondering what that popping sound in my ankle had meant.

Anyway, I won’t bore you with the gory details, but I was done.  There was slight chance I could have played in the finals if we’d made it, but as you’ve probably suspected, we didn’t.  We lost by ONE POINT in the semi-final game, and I sat on the sidelines in my black skirt, tights, aircast and white blouse and agonized over those final minutes, unable to help and if I’m honest, feeling extremely sorry for myself. 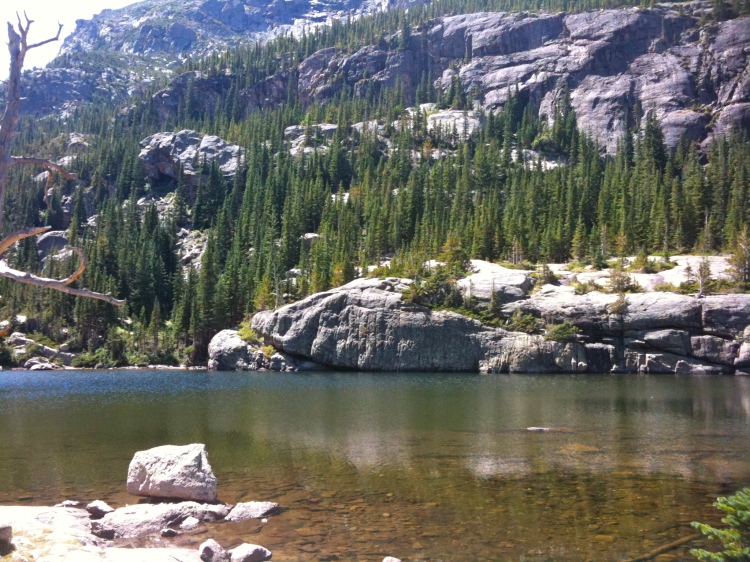 That, ahem, mishap did not, as you might expect, take place while hiking up a mountain or down a cliff, but while walking on a mostly flat surface peppered with the occasional flat rock to step on.  One misstep, and down I went, face to rock, to the chagrin and well-hidden amusement of my friend who was hiking with me.

Luckily, the sprains are never as bad as the first one was, but they are annoying.  And they get me thinking.  About weakness.

My ankle is weak.  I know this.  So I consciously try to strengthen it, and I do my best to remember that it is weak, and will probably betray me at some point, but sometimes I forget to pay attention.   I’ve noticed a pattern to the recurring rolling; it usually happens when I’m what my southern pals would call “hepped up” or when I’m extremely relaxed, like I was at that gorgeous lake in Colorado pictured above.   Today, for example, I caught myself riding the anxious excitement of a website launch, walking in my tall wedges with a reckless, “I’m so important” kind of stride, and I had to force myself to remember that it would hurt like hell to roll my ankle in those things.  I slowed down and started to think about each step, with awareness of the weakness of my body at that moment.

What’s the life lesson here?  I don’t know.  I think it might be that we are told to hide weakness, to fear it, to pretend it doesn’t exist, but it does.  It will come back to get us.  If we blithely choose to forget about it, we can get by for a while, but it always rears it’s head.  And when we pay attention to it and understand why it exists, we tend to take better care of ourselves and have better overall outcomes.  I can see major parallels to this in business, for sure.  I mean, when was the last time you were praised for admitting you couldn’t do something or didn’t have a particular skill?

I think there’s also something about how you handle it.  For example, a few weeks back the whole rolling thing happened while I was in a restaurant with a colleague.  Pretty embarrassing, but at least I caught myself and didn’t take a complete dive.   Still, I felt my face flame, even as everyone was kind and did their best not to humiliate me any further.  But I shook it off pretty quickly, because after all, it happens all the time, and what I’ve learned is that if I don’t make it a big deal, no one else does.  Probably because they don’t want to be embarrassed for me anymore than I want to be embarrassed for myself.

Think about that the next time you fall on your face in work or at home.  Trying to pretend it didn’t happen doesn’t work, but fessing up usually does.  Unless the people you hang with are jerks, they don’t want to dwell on your weakness, probably because it reminds them of their own.  So acknowledge it, admit it got the best of you, and move on.

You can even take a little bow, as I did in the restaurant.  After all, if you can laugh at yourself, those who would laugh at you don’t have any ground to gain.

One thought on “Weakness”