Since I announced that I’m leaving my current job later this summer, there are times when I get a big pang of sadness…usually when I realize I’ve come upon a “last”.  While I won’t miss my last 10 meeting day, I realized yesterday that I was witnessing my last Broadway load in as the crew of War Horse, along with the WAC crew, worked to bring the show to life.  I’ll admit to a little bit of gloom at that thought.

Today was different, though.  Today was the first and last time I will get to see a 16-hand horse puppet in our lobby and on our plaza.   But there was no sadness…even though my eyes did well up once or twice.  For some reason, Joey, the incredible life-like horse puppet created by Handspring Puppet Company, makes me emotional. 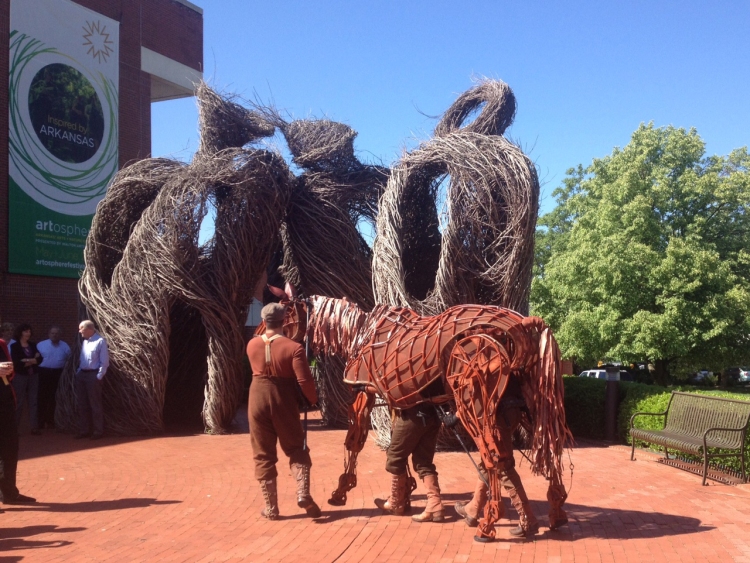 Isn’t he gorgeous?  And I’m talking about the puppet, although the puppeteer is kind of adorable, too.  There are actually three puppeteers, but you can’t see them, since, well, they are making the puppet come to life.

War Horse is a Tony Award winning play.  I realize that most of you probably don’t care about the Tony Awards, but that basically means it’s a pretty good show.  It’s about a boy and his horse and how World War I changes their lives.  Did you know that hundreds of thousands of horses died in that war?  Yes, nearly a million horses.  Just think about that for a second.

Maybe it’s that number that makes me emotional, but I don’t think it is.  I think it’s something else.  I think, in this world that is so full of absolute crap sometimes (crappy TV, crappy writing, crappy actions by crappy people), I am undone by the creativity, skill and trust that the puppet creators and puppeteers put into Joey.  They have decided to lay bare their emotions by pouring them into finding the truth of a horse; how it walks, breathes, flicks its ears and snorts.  They have said “I’m going to give you nothing but the ultimate level of quality and beauty.  I’m going to trust that you know what to do with it.”   As for what we are supposed to do with it, it seems obvious to me.

We’re supposed to allow our imaginations to fill in the blanks, and to believe with our childlike hearts that Joey is real.  We’re supposed to revel in naivete and the power of art. We’re supposed to un-apologetically say that we believe in a world where we WANT artists to care about every detail of a puppet horse. If we don’t…we risk becoming a world without real beauty, you know, the kind that is good and wholesome and positive.  I think we’re closer to that world than we think.  I don’t want to live in that world. So, I’m going to let Joey and his puppeteers and his fellow actors/crew take me on a journey and make me cry and make me feel and make me more of an actual caring human.  I hope you might join me.

If you’d like to come see War Horse, you can get tickets here.