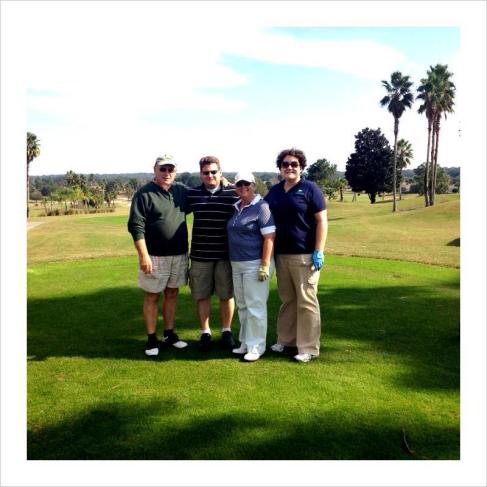 On the plane ride home from Florida this evening, I was surrounded by families and kids, most of whom were probably on their way back from a grand adventure to Disney World or Universal Studios.  I felt a frisson of jealousy when I pondered the downright sedate nature of my own personal holiday, but then I just smiled and returned to my book and let the chaos swirl around me.

My family is pretty small.  There aren’t a lot of cousins and siblings scattered about who convene for family holidays and reunions.  So our celebrations of Thanksgiving have always been relatively low-key, so to speak.

Which is just fine, in case you were wondering.

This year, I got to appreciate how we’ve grown as a family.  The absence of my sister-in-law (just a few days away from completing a 6-month naval deployment) was one gap that I wish I had been filled, as we’ve gotten used to having her around at these things (and she makes a wicked good green bean casserole).

But it was a banner year for us, nonetheless.

We golfed 36 holes over two days and stayed friends, which, 10 years ago, wouldn’t have been possible.  This is largely due to the fact that the parents kicked the kids’ butts, and we kids are strong enough in our mental states to deal with this with, if not grace, than at least exasperated tolerance.  And yours truly was able to hit off the tee more often than not, which makes a huge difference, even if my short game left a lot to be desired.  Hey, what do you want from a girl who golfs 3-5 times a year?

We managed to have quite a deep and wide ranging philosophical debate while at Outback Steakhouse (no Small Business Saturday for us.  But hey, my parents owned a small business, so we have cache built up) that covered everything from sex scandals to the abortion debate.  Note that I said philosophical debate.  No politics.

Well, not much anyway.  Dad couldn’t resist needling me about some of my more liberal leaning tweets, and I couldn’t resist shouting at least once “FOX NEWS IS NOT NEWS!” But that was all.  I don’t think “Obama” was uttered once. No tears, no fights.  Well done, us.

My mom always provides laughter with her insistence on telling us her really bizarre dreams, and she also discovered Angry Birds, which occupied her for much of the evening last night.  I mean it – she went to bed after me!  But her best line was this morning, where, in the the quiet of the house, she looks up at me and says randomly: “These pigs have crash helmets.”  Brilliant.

But the best moment came in the car on the way to the airport today, where my dad busted out the moose jokes.  He has been doing this for as long as I can remember, and every time, we struggle not to laugh when he comes up with stuff like this:

After he was done with the jokes, he was rambling on about something else and my mom, in a laughing voice, said “oh, bullshit!”  And I just about lost it (quietly), giggling from my post in the back seat (no matter how old I am, I feel like a kid again when I’m in the back seat with my parents in front).  I realized I’d heard her use this phrase earlier in the weekend and it just symbolized to me how happy my parents are these days.  Even though they are blissfully retired, they are still themselves, with my dad coming up with the most random topics of conversation and my mom shaking her head and telling him he’s full of it.

My brother and I, as visitors, upset their routine of golf, mahjong, bingo, poker, parties and general lazing about.  We did our share of the latter, but I’m sure they’re glad to have their house back.  And I’m glad to be home, even though I wish I’d remembered to turn on the dishwasher when I left last week.  I know others had more adventurous Thanksgiving holidays, but I’m just fine with mine.

2 thoughts on “The awesomeness of an uneventful Thanksgiving”