It’s been quite an adventure these last weeks.

I’ve landed myself a new job, visited Boston to get a taste of that job, found an apartment, returned to Arkansas, had Cookiefest, threw myself a party that people actually came to, had Thanksgiving, had many a poignant goodbye, packed up half of my life with the help of my parents, sold the other half (also with the help of my parents) and drove over 1500 miles with my mom and dog to get myself to now, tonight, and the tasty memory of Indian food delivery on my tongue.

Most of you know that I’m living in Boston, MA, now, working for a non-profit called From The Top. Until my Jamaica Plain (JP) apartment is ready, I’m staying in a cute little 1 BR apartment at Taylor House, a famous B&B just a few blocks from said apartment. JP, for those who are wondering, is technically part of Boston, but it’s very different from the downtown, and according to those who know, the best place to live if one has a dog. More on that in a moment.

My mom and I completed our epic road trip last night, and then she, road warrior that she is, continued on to NH to visit her sister this morning. This, of course, came after we consumed yummy homemade scones for breakfast; have I mentioned I’m staying at an amazing little B&B? I can’t say enough about this place (pictured above). But anyway…

Today was my first day to find my way from Jamaica Plain to my job. Happily, the busses worked as they were supposed to and I got to work with no problems.

It was also Sadie’s first day on her own in Boston.

Now, I feel that I’ve been pretty stoic about this whole life change thing. Yes, there’s been the occasional moment of emotion, but on the whole, I’ve kept my chin up, pushed forward and tried to see this all as the marvelous adventure that it really is.

My move was planned down to the last moment, and despite the dubiousness of my parental units, went off without a hitch. But there was one thing I couldn’t control; how my dog would react. See, Sadie hates the car, so it broke my heart a little to think that I would subject her to 3 days of driving. She’s an Arkansas hound; how would she handle heading up to the cold north to be with those snooty Yankee dogs? And what would she do when left alone by herself in a strange new place?

She survived the car, it would seem. The jury is out on North-South canine relations, but as to the last question, get this. When this B&B was recommended to me, I learned that the owners lost their beloved dog this past summer. So I suspected that Sadie might find some new friends here. I made sure to introduce her to the guys (Dave and Daryl) yesterday – Daryl took her picture – and they idly mentioned they might take her for a walk. Today, I emailed that they were welcome to hang with her, and as I arrived home, here’s what happened.

I came down the stairs, fumbling my purse and gloves. I twisted and turned the keys, messing up the unfamiliar locks, and it wasn’t until a few minutes of this that I heard, through the door, the telltale sound of Sadie doing her post-nap shake. This tells me she was sound asleep on the bed; a good sign. Then, I opened the door, and there’s my girl, wagging and jumping about. I glanced quickly at the chair where I’d left the leash; it wasn’t there, which means she’d at least been taken out to pee. As I was sighing in delight at this small relief, I spotted a handwritten note on the bed, laid neatly atop her leash, telling me that Sadie spent the day in the kitchen with the guys AND they took her for a walk around the pond (1.5 miles). They even gave me an accounting of her bodily functions.

Y’all, I sat down on the bed, tried to give Sadie a hug as she wiggled about, and cried a little. I was laughing too, and trying to figure out what the heck was wrong with me, until I realized the tears and laughter were a release of the final valve of tension about this move, the one I’ve carried the longest and with the most trepidation. Yes, this is a new place. Yes, I’m going to have to dig my car out of the snow on more than one occasion. No, I don’t have my peeps around to keep me in game nights and volleyball. No, they don’t have Hammontrees Grilled Cheese here.  I have to make new friends, do a crap-load of paperwork, and figure out the foibles of a new non-profit, but really, none of that matters. What matters is my dog has people looking out for her and I didn’t even have to ask.

It is just the most. awesome. thing. ever.  I’m not sure how I got so lucky, but I’ll take it.

So will Sadie, apparently. After wolfing down her dinner she promptly passed out again. I love the sight of a tired out pooch. 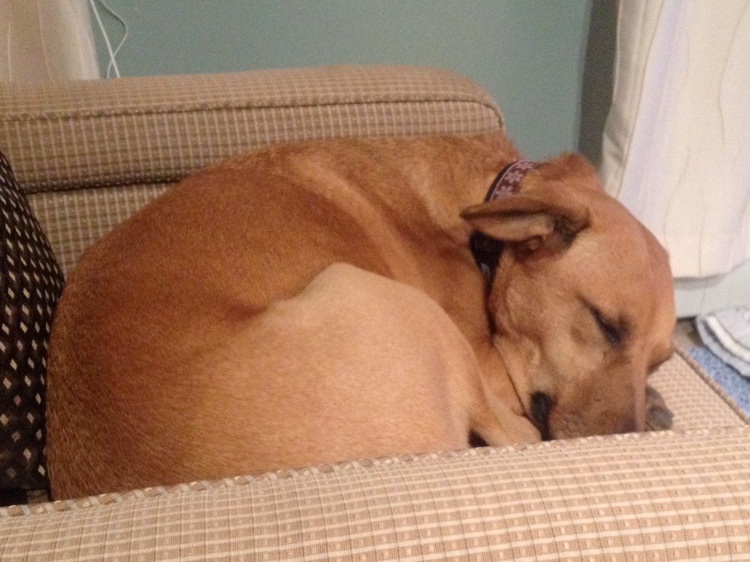 One thought on “Feelin’ lucky in Boston”