UPDATE:  I started this blog post on 7/17.  Since then, there’s been an awful shooting at a Colorado movie theater.  I’m aware that this entry seems more than a little petty in our current context.  But it reflects my recent thinking so I’ve decided to post it anyway. 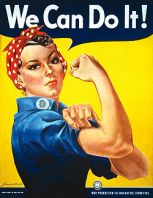 Yes, yes, I’m aware that I’m behind on my blogging from the Grand Pacific Northwest Adventure.  All in due time.  In the meantime, I feel the need to pontificate about something.

A few weeks ago I, along with millions of other women, read an article titled “Why Women Still Can’t Have it All”. Published in the Atlantic Monthly, and penned by the first woman to hold the role of director of policy planning at the state department, I found it to be fascinating and very real.  It was a wandering, sometimes apologetic, yet fierce set of ideas, written by a thoughtful and smart woman.  Not surprisingly, it revealed that women of all ages are really struggling to know what’s right as we strive to find our place in the world.  Mostly, though, I was struck by this paragraph, which summed up a long argument the author was making:

The discipline, organization, and sheer endurance it takes to succeed at top levels with young children at home is easily comparable to running 20 to 40 miles a week. But that’s rarely how employers see things, not only when making allowances, but when making promotions. Perhaps because people choose to have children? People also choose to run marathons.

Underneath this statement is a healthy dose of conflict, pitting those with children against those without.  I realize that’s a simplistic reading, and probably not the author’s intention, but when you effectively say “Yeah, that’s great that you did this great thing, but here’s what I’m dealing with…”, you’re asking for a fight.  Maybe it’s a good fight.  That’s beside my point.  At which I promise I’ll arrive soon.

Yesterday I read a considerably less well thought out article, about the same topic, in PR Daily, that prompted a bunch of comments.  The line in this article that stands out is this:

I don’t have kids so I feel like I’m not completely qualified to tell you how to have it all.

After which, of course, the writer proceeded to tell us how to have it all.

The comments to this piece quickly devolved as you’d expect them to, into “I don’t have kids and I feel like my needs aren’t valued” and “You don’t have kids so you have no idea how hard it is.”

It struck me today that this “competition” for the busiest life is a waste of our considerably valuable time.

Why does everything always have to sink to a competition?  Whose life is more stressful, who’s got more on their mind…why does it matter?  Do we really need to compete over who got less sleep last night? Why can’t I we all just enjoy chatting about our weekends around the coffeepot, and then get back to work?  Why do we have to have a national debate about this?

It was while reading another PR Daily story today that I think I landed on the reason.  It’s age-old, and it came after a commenter accused the writer of creating stories about conflict to drive readership. I confess, I had a face-palm moment.  Well, duh, of course.

Conflict sells.  It’s more interesting to talk about around the coffeepot. Let’s face it, Harry Potter would be pretty boring if Harry wasn’t fighting the big and bad.  Just think how boring the blogosphere would be if we didn’t have anything to fight about, battle against or [insert war metaphor here].  I wouldn’t even have had to write this blog post (gasp, how terrible!).

I agree 100% with Anne-Marie Slaughter that “(the Declaration of Independence) did not declare American independence in the name of life, liberty, and professional success”, and that we have considerable work to do to make our workplaces healthier and more productive.  But I don’t believe that pitting women against each other in a competition for who has the busiest and most worthy lives is a sound way to move things forward, no matter how many ads it sells or blog articles it spawns.

So that’s it.  Pontification over.  I guess it all comes down to “why can’t we all just get along?” And why can’t we have a world full of puppies, rainbows and unicorns, too?  🙂