Ok, so, for a bit of context, the Grand Pacific Northwest Adventure (GPNWA) was born when my brother and I decided to hang out for a few days during the summer while his wife is deployed on a frigate with the Navy.  He made the idle comment “well, the Red Sox are playing the weekend before the 4th in Seattle” and that was all I needed to hear.  From that evolved a three-city adventure for me, but let’s not get ahead of ourselves.

Our Seattle adventure began with my poor brother enduring what was probably the most convoluted flight screw up/rerouting ever.  While he was sprinting between terminals, I was enjoying a stress-free trip via Southwest, and when I arrived in Seattle, I secured our car, marveled at the 70 degree temps, and hung out in the cell phone lot until 3pm when he was supposed to arrive.  By 4pm, when I hadn’t heard from him, I will admit to a little bit of panic…er…worry…creeping in.  I would like to tell you I didn’t pull out my phone and scan the headlines for plane-related news, but I’d be lying.  But eventually I found an online flight tracker that told me his plane would land by 4pm, and sure enough, a few minutes after that, it did.  I have never heard of a more jacked up flight process than the one he endured.  By sheer force of will, he made it to Seattle in time for us to race to our hotel, wait for them to finish cleaning our room (at 5pm.  Huh?) then head downtown to catch the Red Sox v. Mariners game. 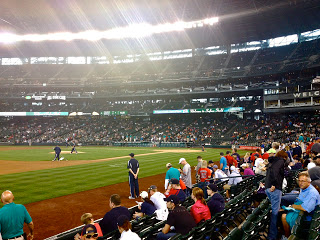 The story of how we got seats in the 7th row on the 3rd base side is pretty awesome, and can be summed up by one word “subterfuge.”  My sister-in-law enlisted me to make sure that SHE could buy our Red Sox tickets for us as an early anniversary present to my brother, so I had to, er, mislead my little bro into thinking he didn’t have to buy the tickets.  Needless to say, it worked, and we had a great time, although the Sox picked that night to be unable to hit more than a single and lost in extra innings.   By the time they surrendered in the 11th inning, Pete and I had surrendered as well, to jet lag, and vacated the park early.

Turns out our lovely hotel, The Cedarbook Lodge, served a fantastic “northwest” style breakfast, including hard-boiled eggs, various salami-like meats and salmon, along with hot oatmeal and some yummy apple jam-type thing.   (Side note: oatmeal is amazing…when someone else cooks it for you.)  For the record, the Lodge was an amazing place to stay and I highly recommend it if you’re going to Seattle.  More on the terry cloth lined robes later. 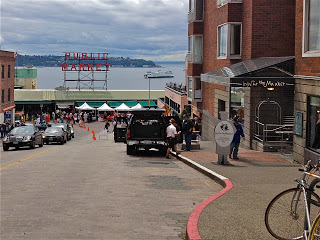 We began our day two with a trip to the incredible Pike Place Market, where we did not, alas, see the famous fish-tossing guys.  But we did visit the original Starbucks and buy some artsy-craftsy stuff and take lots of pictures.   We also visited the Seattle Aquarium, the Space Needle and the Seattle Center, all of which had the air of slightly tired tourist attractions focused mostly on kids.  But still, there were great views to be had and adorable river otters to photograph.  (Side note: the otters were not, happily, as pissed off as this river otter I just heard about) And there was sushi to eat for lunch at Japonessa.  Yummy goodness.

That evening, we wound our way up to Queen Anne, a beautiful neighborhood northwest of downtown, for a pleasant dinner at Emmer & Rye.  My brother and I always manage to have pretty good dinner conversations, and this one ranged from family to work to god to finances.   Then we went back down the hill and turned in early. 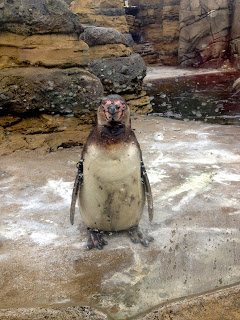 Our final full day in Seattle began with the Woodland Park Zoo, a pretty good zoo, I’d say, and also the lucky folks who managed to buy www.zoo.org.  The tiger made a weak showing (she had the nerve to be sleeping!), but there were wolves and meerkats.  And the obligatory penguins, of course.  After the zoo, we had lunch on the pier and then took a harbor cruise with the perkiest tour guide ever.  Then, we faced a dilemma.  What to do next?

Neither my brother nor I are terribly decisive when it comes to travel plans. Thus, we spent a lot of time doing the whole “well, what do you want to do?  I don’t know, what do you want to do?” thing that drives outsiders nuts, but is a pretty standard thing in most families.  We literally sat paralyzed on the pier with indecision for about 20 minutes, until finally we decided to investigate the ferry system.  We walked down there, putzed around the maps for a bit, and then decided join the commuters and give a ferry ride a try.  Thus began the weirdest part of the GPNWA.  By this time my phone was dead, so I have no photographic evidence.  You’ll have to take my word for it.

Not knowing much about the ferries, we decided to go to Bainbridge Island.  I could tell my bro was skeptical about the whole thing, but lacking other options, off we went.  Bainbridge Island, according to the city website “is located within the Central Puget Sound Basin, east of the Kitsap Peninsula and west of the City of Seattle. With 53 miles of shoreline, the island is approximately five miles wide and ten miles long, encompassing nearly 17,778 acres, or 28 square miles (73 km²), and is one of the larger islands in Puget Sound.”  That translates into “small and sleepy island,” in case you’re wondering.

When we arrived on the island, we got off the ferry and somehow found ourselves following the “Waterfront Trail”.  All we had was a tiny map from the map booth at the ferry station.  So we set off.  We walked along the waterfront (that was lovely) and up through a park and then we found ourselves in a residential area.  So we kept walking.  And walking.  And walking.  Every time I wondered if we were lost, we’d see a tiny brown sign in the distances, and we’d head for it. Sometimes the signs had arrows pointing in opposite directions; those were super helpful. Sometimes we walked past dumpsters and through patios.  Other times, we were squeezing between hedges and the back wall of a historical museum.  It’s only now, as I look at the map I found online, that I realized we walked the entire “Western Loop” of the trail.

And then we were done.  And we looked at each other and said “um, ok, now what?  We’re stuck on Bainbridge Island (population just over 3000) with nothing to do and we’d really rather be back in Seattle eating more sushi.”  So we decided to try to catch the ferry back.  Problem was, we were about a 1/2 mile away and we had 8-10 minutes.  So we set off at a “brisk” pace.  Eventually, the fear of having to find entertainment for another hour if we missed the ferry meant it was time to double-time it. So we jogged the last 3-5 minutes, all the way up the long, winding, EMPTY walkway to the ferry, and breathlessly thanked the dude who was literally holding the gate for us (and was none to happy about it).

Then it was back to Seattle for more sushi at Nijo Sushi (nom, nom) and dinnertime conversation.  This time, I wound up getting a free financial counseling session from my super-smart bro.  Always a plus.  Then, back to the hotel so we could chill and relax until Pete had to leave the following morning.  We eschewed the hotel breakfast and instead found a cute little diner in nearby Des Moines, WA called Blue Vanilla Bakery.   And then Pete headed back to Virginia and I back to the hotel, where I spent a luxuriously afternoon taking a long bath, walking the trails, enjoying the terry-cloth robes that came with the room (terry cloth on the inside, cotton on the out) and lazing about.  My sloth-like behavior stretched into the evening as Jenn’s plane was delayed multiple times, but eventually she arrived, thus beginning part two of the GPNWA.  But that’s a story for another time.