This is wisdom you can’t get anywhere else.  Enjoy.

***
Yesterday I dumped an entire glass of milk all over the kitchen floor.  I didn’t cry.  But I did swear.  I think that’s a legit violation of the cliche.

***
I was talking with a friend the other day about social media “food-braggers” (my term, just now made up).  You know who you are.  You’re the ones who post photos of things like “almond eggplant reduction served with freshly plucked duck, with a side of sauteed leeks and braised gold leaf” or other such delicacies.  Your posts generally inspire two reactions.  The first: making yourself more likely to be stalked by hungry “friends” – and second, making cooking morons like me feel inadequate.  I’m sure you don’t mean to.  Just remember, though, when I post that I had Cheerios and a glass of Pinot for dinner, that one’s for you.

***
Is it wrong that I got extreme joy out of putting together my new outdoor umbrella table, especially after reading all those reviews that said it was hard to put together?  I’m convinced those “some assembly required” furniture pieces exist just to make sloths like me think we could actually do work with our hands if the world ended and we had to build a hut out of the debris of humanity.   Provided we have exactly 13 bolts, washers, and that handy little l-shaped wrench that comes with them. 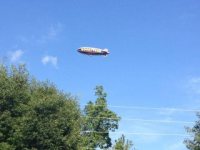 ***
The Goodyear blimp has been flying around since the Walmart Shareholder’s meeting this past weekend.  None of us can figure out why it’s still here, but I can tell you this; it’s an advertising failure.  I have no desire to buy Goodyear products after seeing the blimp buzz around with scrolling marketing messages marring my blue sky.  It was cool once.  10 times later, not so much.

***
One of the great pleasures of my life came last night when I watched a post-game interview with LeBron James, after the Celtics narrowly didn’t lose a playoff game.  King LeBron lounged, arms behind his head in a sulky, defiant pose and declared flatly “I don’t foul out.  I know how to play this game.  I don’t foul out.”  Um, but you did, Sir James.  Sorry about that.  I’m sure it won’t happen again because those refs will be fired, but it was a beautiful thing while it lasted.

***
Today I had to give my name to someone over the phone.  For most, this is no big deal, but for me, it requires bit of patter I’ve perfected over the years.  It’s a necessity when you have an, ahem, unusual name like mine.  Here’s how it goes:

Usually, that’s how it ends.  Today, though, the lady stumped me.