This day always sneaks up on me.  I’ll be chugging along with the normal routine, and then something will make me stop in my tracks and remember.

7 years ago this very early morning, my friend Nicole was shot and killed on the lower east side of Manhattan. The story made the national news: I got phone calls from TV stations when it happened. Her murder has a Wikipedia entry.  I’m not sure what to think about that, but there it is.

I’ve been thinking lately about those who leave us too soon.  Friends whose parents have passed away, parents who are younger than mine.  A colleague who wondered in her blog if all people lose friends when you’re in your 30s.  Another colleague who lost two dear friends in a senseless drunk driving accident just a few months ago, and is now dealing with the fact that the scales of justice don’t always balance quite correctly. It seems unfair that life goes on.  But the reality is that a different life goes on, because what has been lost can’t be filled in.  Life grows back around the hole, but it’s changed.

7 years later, the sadness of my friend’s death has become more poignant than viciously hurtful.  My specific memories of her have faded, and instead I find myself wondering what all the big events of life would have been like these last 7 years if she’d still been around.

There’s really no way to to know if Nicole would even have been at the big events; the weddings, the babies being born, etc.  Would we have produced more plays with our fledgling theater company?   She left us before facebook became a thing…I wonder what she would have done with it?  She would have gotten married a few months later; would she have kids now?

I would have liked to know those kids.

I don’t have many photos of Nicole.  The truth is, we were just…friends.  If she had gotten married, I’m not sure I would have gone to the wedding.  In fact, the last time I talked to her, 3 or 4 months before she died, the conversation was an update, you know, the kind you do with a friend you don’t keep in touch with much. I remember thinking, as I hung up, that I wasn’t as connected to her as I used to be.  It made me sad. 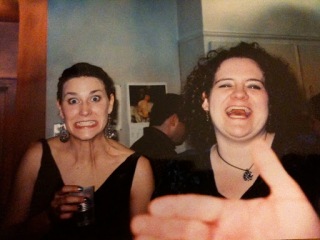 But these two photos can tell you something about her, and the effect she had on others. They’re from a New Year’s Eve party, I think, in Brooklyn, perhaps? It makes me laugh that I had to take a picture of them with my phone to get them onto the computer.  How the world has changed in less than a decade.

But what hasn’t changed is that there are a lot of us who remember Nicole, and who still miss her.  I think we always will.

2 thoughts on “When they leave too soon”