At the National Arts Marketing Project Conference a few months back, I learned a few special new words.

What these words all had in common was their universal ability to irk me.

Here are the culprits:

What is it about these words that irk me, you ask?  I’m not sure.  I think it might be that they are just too…cute.  I supposed they could also be considered clever, but they are either too cute, or not clever enough, or something.  Whatever.  I’m weird and judgmental, I get it.  But I promise there’s a reason for my ramblings.

Back in December, I posted what might be my most inane and useless facebook status ever, about the awesomeness of my socks.  Upon request, I later added a photo of said socks.

Then, for Christmas, one of my staff gave me a pair of wacky-cool socks as a gift.  She didn’t say, but I wondered if the choice of gift was prompted by that facebook post. 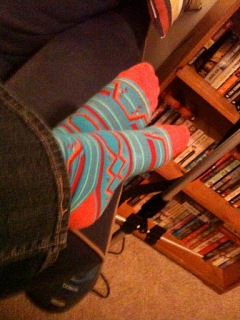 Anyway, today I decided I needed to wear my new socks.  Here they are (and if anyone knows how to do self-portraits of feet that don’t make them look fat, let me know).

And then, suddenly, I was seized by brilliance.  I could take a word that annoys me and turn it into a concept that makes me smile.  It could be a blog title, or a product name, or just a word.  And that word is…

In other news, there was some interesting stuff on the interwebs today.  The first comes courtesy of my dad.  Gotta love my conservative dad, who sends me patriotic YouTube video and rants against the government one day, and sends me a tip from Huffington Post that I should check out “El Gordo” the next.

El Gordo, it turns out, is one of the biggest galaxy clusters in the world.  It was discovered via collaboration between NASA and Chile.  It’s something like 7.5 BILLION light years away and will provide insight into such coolness as dark matter, dark energy, and beginnings of the universe.  In sending me the link, no doubt, Dad was remembering me retreating to my 3rd grade self as we left the Kennedy Space Center a few weeks ago, declaring “I want to be an astronaut when I grow up.” Thanks, Dad, that was very cool.

Changing gears, I also submit for your review this blog entry about a ringing cell phone during a New York Philharmonic concert. Here’s a bit from the New York Times about it, including an interview with the conductor, who stopped the entire orchestra, turned to the front row, and engaged in conversation with the culprit, eventually getting him to turn his phone off.

He was in the very front row at Avery Fischer Hall, and it was the final bars of the final movement of Mahler’s Ninth Symphony.  I confess to not knowing one Mahler symphony from the other, but I know how people say the words “Mahler’s Ninth” – with reverence. It’s a spirtual piece, and the final bars, where this unfortunately happened, are nearly silent.  How disappointing for everyone in the room to have their experience ruined like that.

That said, can you imagine being this guy?  I find myself distressed by the hatred and vitriol expressed toward him in the comments and blogosphere.  Yeah, he screwed up.  We all do. But aren’t we supposed to forgive?  I didn’t see a lot of that in the responses to this incident.  In fact, I saw one comment that said the guy should be sued by the rest of the audience, and cynically, I will bet money that someone called the NY Phil and demanded a refund.   What a shame that we’re all so angry all the time.

But, let’s end on a happier note. Today I watched musicians from the Blue Man Group touring production do a workshop for 100+ students at Fayetteville High School.  It was pretty amazing, especially when they invited the kids up on stage to drum together.

And last night, I treated a friend and myself to center section seats to the show.  Even though I’d seen it a half dozen times before, it was a complete blast.  There’s something about the Blue Man aesthetic.  Weird, gentle, funny, curious, wordless and always supportive.  Gently mocking of the world, yet capable of sending an entire audience into a paroxysm of delight (I love that phrase).  And the drums.  Oh, those drums, the big, pounding, visceral sound.  I wanna be a Blue Man.

As usual, I must admit I have a pretty great job.

One thought on “Awesomesocks, EL GORDO and other news only fit to blog”