There was a moment during my recent hiking trip to Canada when I found myself asking an important existential question.

See, as regular blog readers will know, I tend to have the occasional meltdown while climbing up hills (see this post from back in May). I worked hard before this trip to prepare – as best I could while living at sea level – in the hopes that I could avoid the meltdowns of hikes past. I was more or less successful. Still slow, still doubtful at times, but there were no tears shed on the trail this time around.

But there were definitely a couple of moments, on steep uphills, moving at a pace less than that of a snail, when I wondered if my legs would make it, when I questioned my overall sanity. Had I tricked myself all these years? Was I seduced by the fun of buying gear, by the buzz of planning a trip, by the promise of a great photo?

Was I a giant fraud selling myself as a “hiker”, when really I’m just a person who likes to take long walks in nature?

On the eve of our 4th hike, I tried to fall asleep, stomach jumping. We’d had a lovely day, starting with 6ish miles on the Edith Cavell Meadows trail, which featured more elevation than my sea level legs had seen in a looooong time. We’d been rained on, and shrouded in a fast-moving mist that wiped out all visibility beyond 5 feet. That mist had cleared, leaving us with incredible views of snowy mountains. We’d seen marmots and a strange-looking pigeon, lots of mountain wildflowers, plus a glacier ! and its associated pools/waterfalls. We’d added a few more flattish miles en route to gazing at rushing waterfalls, enjoyed a marvelous dinner, and now were cozy in our cabin, resting up for an early start the next day.

But I couldn’t sleep.

See, Shawn had warned me that the Sulpher Skyline Trail, our next hike, would be steeper than we’d faced previously, with another steep summit. I had visions of several miles of serious uphill, and I had serious doubts about my ability to actually make it to the top.

When I woke the next morning, anxiety had settled into my stomach, but I was also resigned to the real fact that we were doing this hike, and there was no going back. At the start of the trail, I set my shoulders, preparing for humiliation and embarrassment and hoping I’d be able to keep it together. As we started out, on a gently sloping paved path, I forced my legs to move slowly, at a deliberately measured pace, in the hopes of saving some juice for the steep parts. Which I knew were just around the corner.

As a couple of kilometers fell away, and the slopes remained manageable, I found myself daring to hope that I might make it through without too much struggle. Then I ruthlessly quashed such nonsense, because surely the really steep part was coming soon. Up we went, switchback after switchback, and while I had to stop occasionally to catch my breath and give my legs a breather, it wasn’t as bad as I’d imagined.

At one point, Shawn said “Hey, we’re almost there!” and I shot back “Don’t do that! I know there’s worse to come!” But a few minutes later, we popped out of the trees and beheld the magnificent views of the pre-summit clearing.  Oh, those views. They were wonderful. And we weren’t even at the top.

Now, at this point, it got steep, for real. But that was to be expected, and the realization that I’d gotten through the bulk of the hike in relatively good form was heady.

I won’t lie, it took me a long while to climb up the final bit to the summit, but we made it eventually, and the payoff…well…see for yourself. 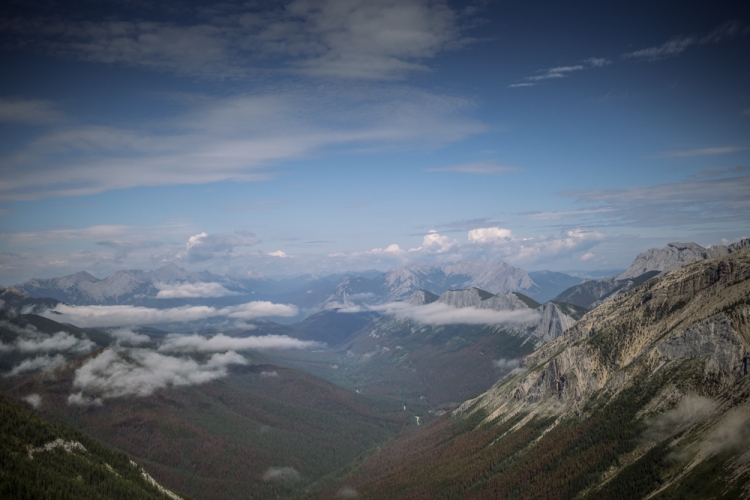 The purple and blue haziness of that valley view…honestly, I never wanted to leave. The summit was fairly busy with other people, but the vibe was happy and chill and everyone was proud to have gotten to the top. At one point I said to myself “I can’t get enough of this.” A total stranger overheard me and said “Yeah, well, you earned it.” All I could do was grin at him.

And at that moment, I realized that I really do like hiking. I might have less love for hiking uphill for extended periods of serious steepness, but being a flatlander, I have decided to forgive myself for that weakness.

Because, standing in places like this, looking out upon a grandeur that very few people get to see in person, and knowing I got there by the power of my own two (admittedly tired) legs…that’s pretty damn cool.

And as a wise man once said “50% of mountaineering is downhill.” And I dig me some downhill.

PS: As usual, a big shout out to Shawn for being an awesome hiking partner who never, ever makes me feel bad for stopping to “admire the view”.