I love SportsNight, A Few Good Men, Studio 60, and of course, The West Wing Seasons 1-4. I haven’t seen The Social Network, The Farnsworth Invention, or Steve Jobs, but I’m sure I’d love them. I mean, this is how much I love Aaron Sorkin’s writing: when I am re-watching The West Wing, which I have done many, many times, I find myself falling into Sorkin-esque speech patterns, so much that I have to stop myself lest my friends think I’m a pompous erudite with way too high an opinion of myself, like so many Sorkin characters. When I heard he was going to write To Kill a Mockingbird for Broadway, I was thrilled. 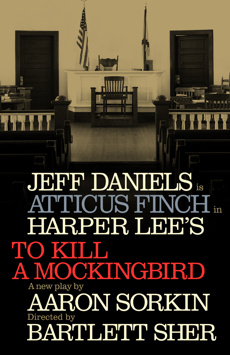 And then, I read this article. In his lovely, self-deprecating way, Sorkin talks about how terrifying and difficult it was to write the play, for all the reasons you’d expect when you’re trying to remake something that never asked to be remade because it was epic all on its own. He describes the moment when he figured out how to do it – he decided that Atticus Finch needed to be a protagonist of the story.

I haven’t read the book in a while. After I finish my current book, I’m going to. Because all I remember about it is that it was Scout’s story, and her dad, Atticus, was almost too perfectly heroic. I’m pretty sure that wasn’t an accident on Harper Lee’s part.

So when I read that Atticus needed to go on a journey that he didn’t take in the book, at first, I said “ok, sure, that’s storytelling 101.” And then, Sorkin wrote a couple of casual, almost flippant sentences that made something uneasy creep into my stomach.

In the book, Atticus isn’t the protagonist — Scout is. Faced with the brutal realities of the Jim Crow South, Scout loses some of her innocence. Her flaw is that she’s young. But for the play, I didn’t want Scout (or Jem or Dill) to be the only protagonist.

Later that day, I was walking my dog through the neighborhood. Apparently the article was in my subconscious, because suddenly, I stopped walking and said to myself:

WHY THE HECK CAN’T IT BE ALL ABOUT SCOUT? WHY DOES IT HAVE TO BE ABOUT ATTICUS (OR JEM OR DILL)?

As I’ve done all my life when experiencing such feminist flareups, I shoved it away as being “too reactionary.” And then, I stopped myself, and allowed myself to really think about it: Why can’t it be Scout’s story? I would LOVE to see what Aaron Sorkin would do with this story, framed by the innocence of a child, in today’s America. Why can’t he write that?

I don’t know the answer, and I’m not going to pretend to try. It’s a free country, and Sorkin can write whatever he wants and I will definitely go see it, and likely be swept away by his words and storytelling.

But I’m not ignoring that little voice that stopped me in my tracks.

It’s the same voice that popped up when I first heard the Hamilton soundtrack, and despite how much I adored it, wondered if the women had anything to do other than be in love with their men.

It’s the same voice that wishes Lin-Manuel Miranda had chosen to cast one of the founding fathers as a girl in drag. He broke tons of barriers with that show, so why not that one?

It’s the same voice that wished the Fellowship of the Ring had included a couple of Female Fellows.

It’s the same voice that has made me always want to play the role of Enjolras in Les Misérables, (other than that brief phase where I was convinced I was Eponine), or at least see some fabulous female play it.

It’s the same voice that wonders what the impact would have been if J. K. Rowling had created Hannah Potter, the Girl who Lived.

Today, also while out walking my dog, that voice piped up with the perfect encapsulating question. Aaron Sorkin begins his essay by sharing that a famous Broadway producer called him when he got the Broadway rights for To Kill A Mockingbird, and asked Sorkin if he wanted to write it. If we’re being honest, we all know that producer was not going to call any of the young, brilliant, not-famous playwrights out there today. He was going to call one of the best and most beloved writers of our age. I get that.

So why didn’t he call Shonda Rhimes? Now that’s a play I’d like to go see.