Let’s talk craters y’all. Like actual real volcanic craters in the earth that still have steam coming out of them. Did you know there are such places that have hiking trails into and around them? I didn’t, but I do now!

Every book or blog about the Big Island says that Kilauea Iki Crater in Hawaii Volcanoes National Park is one of its best hikes. I was a little dubious coming in because it was only 4ish miles long and it seemed like much of it was on flat terrain. But I couldn’t deny the coolness of descending into a volcanic crater. It was pouring rain, and it was still awesome. I guess that’s the mark of a great hike.

Speaking of pouring rain, on the east/Hilo side of the Big Island, it apparently rains all. the. time. We were there for 3 full days and it rained steadily. But that didn’t stop us.

The us, in this case, is me and my former college roommate. Since today is International Women’s Day, I feel justified in pausing for a moment to reflect on us two women, and the fact that, on this trip, we realized that we’ve been friends for 23 years. We met when I was a sophomore and she was a freshman in college. We are partners in pale skin and curly hair, though I think she looks more like a greek goddess with her blond curls and great smile. Though we haven’t lived in the same state since a brief NJ stint in 2003, we’ve managed to stay in touch through good times and bad. She’s smart and awesome and beautiful, and I’m grateful for our long friendship.

Anyway, the hike began in the pouring rain. We chose the counterclockwise route, which I would highly recommend. The first section is along the Crater Rim Trail, a mostly flat trail that should, per its name, offer amazing views of the Crater and its rim. For us, the views lacked a certain…something.

As you can see, the rain cloud was basically right on top of us. Eventually, we were able to see a bit more of the crater, and if you look carefully, you can see the trail way down below; that faint white line in the grey.

The Crater Rim Trail actually goes for about 12 miles around the Crater itself, a hike I’d like to do someday when it’s not raining.

Pretty soon, we left the so-called views behind and found ourselves in what can only be called “lush rainforest”, filled with dripping greenery and huge fern plants. 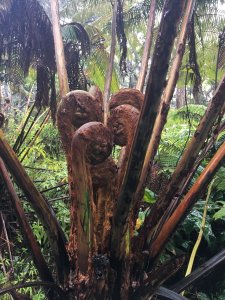 The descent through the forest was pretty easy. Eventually, we started clamoring down some steeper, clunkier rocks that likely give this hike it’s “moderate/strenuous” rating. If it’s not raining, there should be no issue, but in the rain, we had to pay close attention to our feet! We also had to go through that process of realizing that yes, our boots would grip the volcanic rock even though it looked black and slick and like it was ready to send us tumbling.

After just a few hundred feet of steep downhill, we emerged from the trees and found ourselves staring out at a vast, grey, steaming wasteland that looked like what I imagine the moon might look like, if it wasn’t white. This was like nothing I’d ever seen before; I stood in the rain and goggled. Because of the rain, I don’t have a lot of pictures of those first moments in the crater, but I did get this one; look at those red flowers springing up out of the rocks!

After we picked my jaw up from the crater floor, there was nothing for it but to strike out across the lava field, wending our way through craggy mounds of blackness. Ahu is apparently the Hawaiian word for cairn (piles of rocks used to mark trails); following the ahu led us down onto the flat, asphalt-like bottom of the crater, where the trail widens a bit. This terrain is not hard to walk on, but we did it at a snail’s pace because it was just so amazing to look around at the landscape. Parts of the lava looked like it had just broken apart in an earthquake, other parts were smooth and rounded, and steam vents dotted the terrain. For a brief moment, it stopped raining and we were able to get a few good pictures, and we both remarked that we felt like we were about to either win a prize or get eaten by a monster in a Young Adult dystopian novel.

It started raining again as we neared the end of the lava field, and then it was back into the forest, but this time the trail up was a series of gentle switchbacks rather than steep rocks. From here we got the clearest view of the Crater yet. 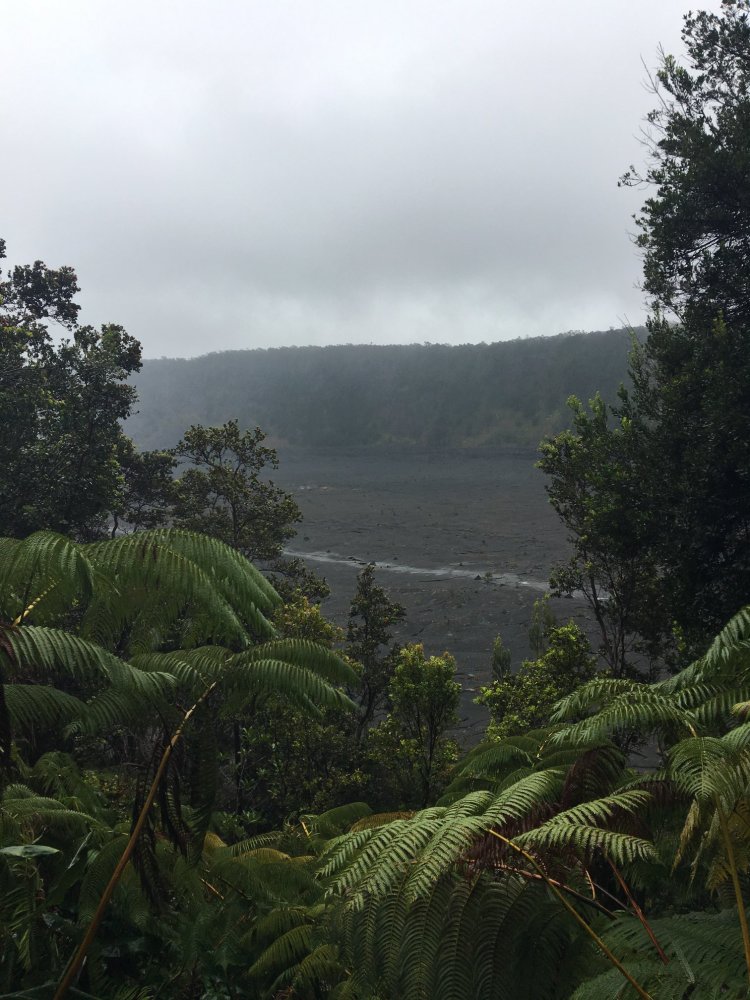 As the switchbacks ended, we found ourselves in a busy parking lot near the Thurston Lava Tube, so we added that the hike.

This is a short little walk through a dark lava tube, which was fun, but would have been more fun if we’d not gotten caught in the middle of a senior citizen tour group. Several of the group were wearing bike helmets, and it took us a second to realize it was because there was a chance they might bump their heads. This seemed like an overabundance of caution, but it was still pretty cool that they all found their way down the steep and slippery stairs into the tunnel. It was so loud and crowded in there that I was content to zip through pretty quickly. Then, it was back to the Crater Rim Trail for a final flat trek through the woods. There were some pretty cool views of the Crater from this side.

And then, we were done. By this point, we were both pretty soaked, even with raincoats and hats, so drying off in the car felt great. We drove to another lookout at the head of a different trail, where we could look down on what we’d just hiked from a different angle. Can you see the tiny, tiny person in an orange jacket down there?

The moral of the Kilauea Iki Crater hike? Don’t let rain stop you. Though I would have loved to see this place in the sunshine (you can check out this flickr gallery if you’d like to as well), it was still an astonishing journey through landscape I’d never seen before. I was exhilarated when I was done even though it wasn’t a huge challenge for my legs. I would do it again in a second.

Summary: Hike 6 of the 52 hike challenge (read more about the challenge here)

Location: Volcano National Park, Hawaii.
Date: February 25, 2018
Distance: 4.4 miles
Wildlife: None except for whatever rustled the leaves in the forest part of the hike.
Notes: Do the hike counterclockwise. If it’s sunny, sunscreen, water, and a hat would be a must for the crater floor. And always remember: