It’s tough to find hiking inspiration in Southern New England in February. If inspiration comes in the form of high mountains and grand vistas, that is. No, these months, for the outdoor adventurer not willing to drive 3 hours for an icy/snowy trek in the White Mountains – aka me – are about small hills, mud, and well, small hills and mud.

But the #52 Hike Challenge marches on, and I’m a couple of weeks behind, so I had to get out this weekend. I wanted 5ish miles, and I hoped to be able to let my dog off leash, which definitely limits the options even more. Thankfully, though, in Massachusetts we have a non-profit called the Trustees of Reservations. The best way to describe this org is to think of state parks, but privately managed. Estates and individuals donate their land to the Trustees, and the Trustees preserve and conserve it, with the caveat that it be made available for public use. There are more than 100 Trustees sites in Massachusetts – and I haven’t once visited one that wasn’t well-maintained and lovely.

And many of them allow dogs off leash, which is a wonder in Boston. If you are a bad dog owner, just pretend you didn’t read that last line, ok?

This weekend I tried a new site I hadn’t visited yet, called Rocky Woods, about 30 minutes away. It’s a very active site, with lots of event programming and plenty of family-friendly “hikes” that are little more than ambles around ponds. Still, by tracing my way around pretty much all the trails, I was able to put 6 miles under my legs, which felt marvelous after a week spent behind a desk. The miles were mostly flat, so there were lots of chances to look around and enjoy being in the woods. There was a “vista” atop Cedar Hill at a whopping 435 feet: 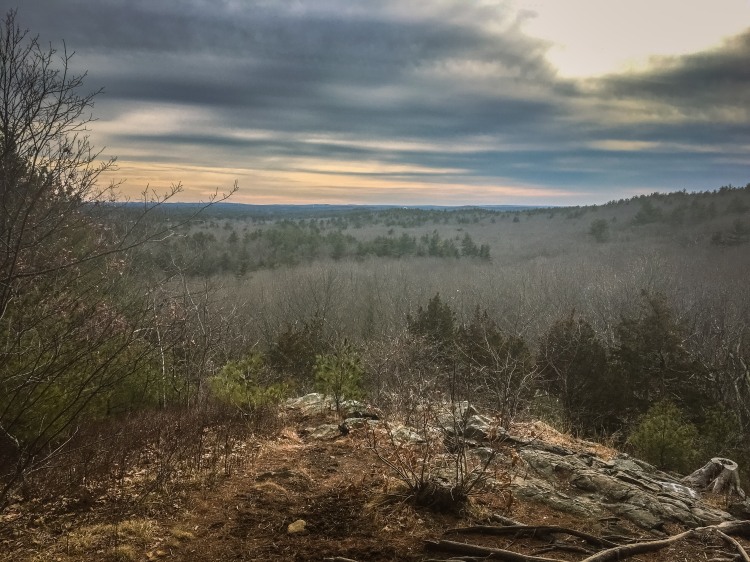 And a frozen pond that was drowning the trail around it and the footbridge across it:

I met some very nice people and pooches, and yes, there was some mud, but it wasn’t too bad. There was one trail that had a low coverage of pine needles, so there was some green to look at, which made me long all the more for spring and that magical neon green haze of new buds on the trees. The trails were well marked and maintained, and all in all I enjoyed myself, even if the hike wasn’t a great physical challenge. And then there were the the occasional woodland creatures we ran into:

There were at least three of these reindeer? critters. Sadie ignored most of them, but the final one, which was standing in the ice on the aforementioned drowned trail, definitely got her attention, so much that she barked a few times at it. A thing to note about dogs off leash here; they are allowed, but there are several sections that are posted as on-leash. I actually think that’s a great way to manage it, because a lot of these sites could be full of people, particularly kiddos, on nice days.

Next weekend, my photos will change a bit as I’ll be continuing the 52 Hike Challenge from the island of Hawai’i! See you then.