There are some vacations that, when they are over, however awesome they were, we are glad to get back to our lives.

And there are some we wish would never end.

Other than a twinge of missing my dog once in a while, my most recent western adventure is one of the latter.

Together with a semi-old (we met in 2009) friend turned new travel companion (this was our first extended trip together), I recently spent 9 days flitting…well, driving…about the American West. Here are the stats:

So, yeah, it was quite an adventure. Lakes, mountains, waterfalls, geysers, bison, sunrises, sunsets, Korean barbeque, Mormons, red rock canyons, arches….so many wonderful things were seen. I could write a whole blog post on the experience of traveling as a twosome, but really, you don’t want to hear me rant against how society is biased toward couples. You’ve heard that before.

Nah, let’s just look at some pretty pictures. You can live vicariously and I can try to keep the buzz going.

Day 1: I flew into Salt Lake City and arrived late. Nothing exciting to report there.

Day 2: The first part of the day was spent wandering the city, trying not to sing tunes from Book of Mormon out loud. We were given a tour of the Tabernacle and Conference buildings by several really, really nice Mormons. One was named Sister Hug. I kid not. It was quite the impressive setup.

Then we drove the 4+ hours north to get to Grand Teton National Park. We pitched our tents in the dark and turned in with plans to rise early the next day.

Day 3: And rise early we did. So we could see this.

We got a few miles in on relatively flat ground at Jenny Lake to ease my East Coast legs and lungs into higher elevations, then decided to do a hike called Death Canyon, which, let’s be honest, was really all about the name. The legend is that some dude entered the canyon and didn’t come out, though the ranger we talked to said he could have just kept going to Idaho. At any rate, I struggled with this hike, although views like this helped:

At one point, I sent Shawn on ahead so he could, you know, hike at more than a snail’s pace for a bit, and spent some quality time communing with nature by the side of the trail. Needless to say, I slept pretty well that night despite chilly temperatures.

Day 4: On this day, we were bound for Montana, to check out an arts center called Tippet Rise that has sprung up from the ranchland. You can read about it here; I don’t want to try to explain it when others have done it better. But it was an interesting experience; we heard some incredible solo piano, and trekked a few miles out into the fields to see these sculptures: 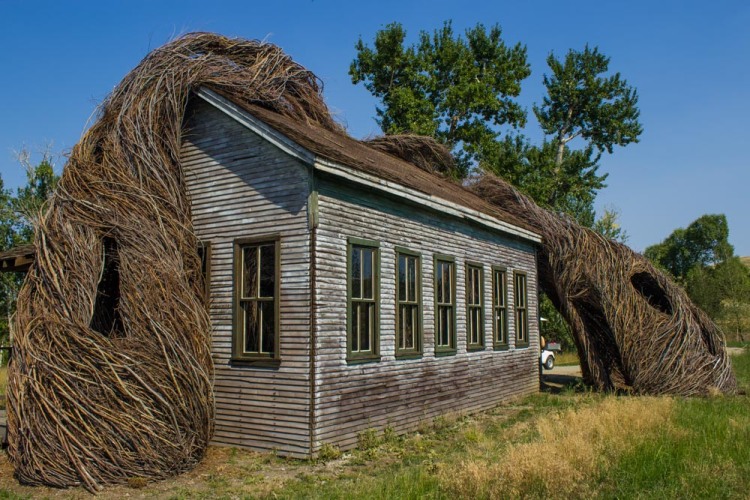 But really, the highlight was the locally-sourced barbeque. Yummo. We stayed the night in a totally adorable little cabin, complete with antlers and horses as our neighbors. Get it, “neigh” bors? Cracking myself up over here.

Day 5: For the first time, our drive wasn’t more than 4 hours, and we made our way down to Yellowstone National Park in good time. So began two days that are a blur of wonderfulness – hikes and photos and views and campfires and stars and bison. I’ll just share some photos and not try to talk about it too much. 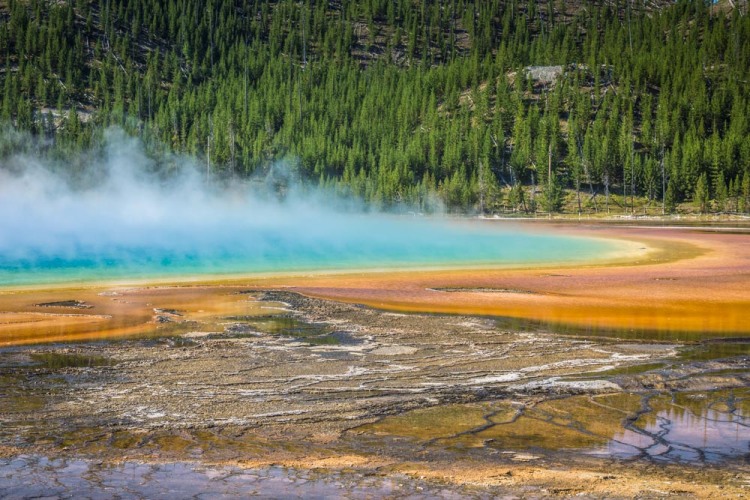 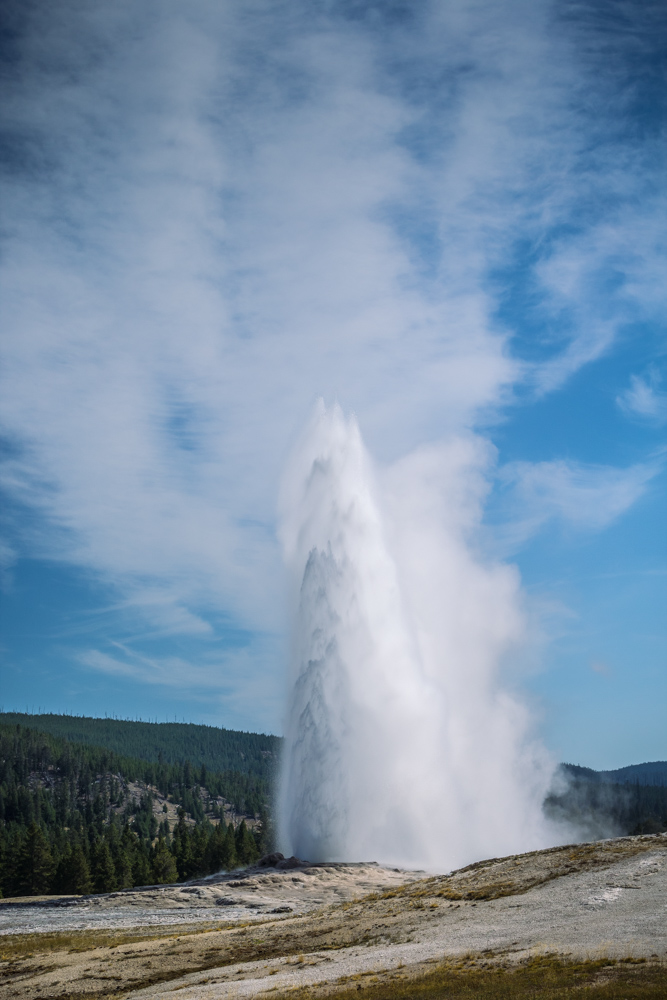 Seriously, y’all, Yellowstone is a magical, magical place. I plan to go back. Anyone who wants to invite me along next time you go, don’t hesitate.

Day 6: Our drive back to SLC took more hours than it should have due to some nasty wildfires in Yellowstone, but by this point, we were pretty tired and dirty and smelly, so heading back to civilization was worth it. Civilization also meant Korean Barbecue (my first), a long shower,  and sleeping on a mattress, plus yummy Mexican food the next day before we headed south.

Day 7: If being among the craters of Yellowstone felt like being on the moon, Moab, Utah and the parks there felt like visiting Mars. We got to Moab fairly late, but managed to get in a two short hikes, one into a canyon, accompanied by bagpipes…yes, I said bagpipes… 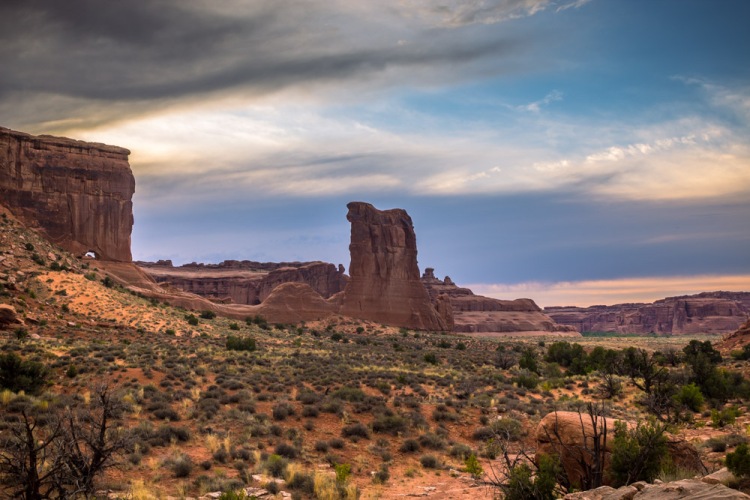 …and one up to try to see the Delicate Arch. If you don’t look too closely, this is a good photo (no tripod, alas):

It was warm and pleasant in Moab, so camping that night was pretty easy. It’s also worth pointing out that this day was the official 100th birthday of the National Park Service. We are lucky that at one point, some politicians decided to do something noble and visionary for all of us to enjoy.

Day 8: On our last day, we ran/drove a gauntlet of gorgeous red rock places: starting off in Canyonlands National Park, where we hiked out to Upheaval Dome, a crazy crater that was formed either by the movement of oceans or a meteorite; we chose meteorite, for obvious reasons.

Next up was a walk along the canyon rim at Grand View Overlook, where you can see the Colorado River.  It was indeed a grand view.

After lunch at Dead Horse State Park (don’t ask how that park got its name, it’s a terrible story), we went back to Arches to do a 7.5 mile hike through Devil’s Garden. Hiking on the so-called “primitive” trail, we saw a bunch of arches, and also did some scrambling over rock fins and down into canyons. Shawn breezed through, I had some moments of struggle, but it was super fun and the views were incredible. See all those towers/spires of rock down there? We basically came through that to get to where  took this photo.

Later, we visited the Windows area of the park, and saw some more arches.

And then we decided to end the day with a race against the sunset to try to see Delicate Arch at night. That was an adventure I’ll tell you about over a beer sometime, but suffice to say that it involved headlamps, a few curse words (uttered by me) and two different paths to the arch (one for me, one for Shawn), but in the end we both made it up and down in one piece. We then enjoyed what was probably the best burger I’ve ever had, and passed out in our tents for our last night under the Utah stars.

Day 9: With markedly less enthusiasm, we rose and drove back to SLC, where even the shower was less awesome (but still delightful). And then, I flew home.

And that, as they say, is that. If you’re still reading, I really do owe you that beer sometime. Hope you enjoyed my travel ramblings.