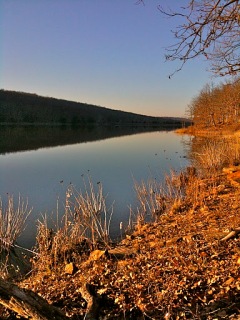 There are some things progeny do that we probably shouldn’t tell our parents about.

For example, there were a few things on my travels in Europe during college that I will never share.  Sorry, Dad.  Some things are better left unsaid.

Yet, what’s a blog for if not to share life’s adventures with a few dedicated readers?  So allow me to regale you with tales of my escapades at Lake Wilson.

Saturday was a lovely sunny day, the kind where I would, if I were the sort, pat myself on the back for moving to Arkansas, where a 60 degree day is not unusual in December.  Indeed, at this time of year, the opportunity to be outside in daylight is so rare that I was seized by a strange urge to go exploring, preferably in the woods, and NOT on a paved surface, as I find those get real boring, real quick.  So I did a bit of research and discovered there is a short loop around a lake at the south of town.

It’s called Lake Wilson Park, and it seemed likely to be deserted, woodsy and involving a body of water, which is another obsession of mine  (a tough thing in a landlocked state).  So I threw my dog in the back of the car (this isn’t an exaggeration – she hates the car so much that I have to manually heave all 48 pounds of her into the car), and headed south.

Turns out the bridge was out (seriously), so I went with instinct and traveled further south, eventually finding my way to the right county road (road is a generous phrase) which led me to the park from the other side.  Reports of its isolation were not mistaken, and as I was getting ready to head onto the trail, I felt that strange feeling that only single people can feel.  Bridget Jones sums it up nicely in her first movie when she says:

Right there. That was the moment. I suddenly realized that unless some thing changed soon… I was going to live a life where my major relationship… was with a bottle of wine… and I’d finally die fat and alone… and be found three weeks later, half-eaten by wild dogs.

In this situation, it translates to:

Huh.  Nice trail, really remote.  No one around.  I should probably tell someone I’m out here.  After all, if I fall in the woods, no one’s going to hear me, and it might be days before anyone realizes I’m missing.  Sadie isn’t the Lassie type to run for help. Hmmm…

Of course, it wasn’t really as bad as all that.  My cell phone still worked.  So off I went.

It was lovely.  The trail was covered in leaves, which meant I was paranoid that I would step wrong and fall on my face when my bum ankle decided to turn, but it made for a nice focus.  It reminded me of a leg of a hike we took on the Grand Colorado Adventure, where the need to put one foot in front of the other took over, and there really wasn’t room to think about annoying work emails, dishonest vendors, or why I feel the need to say “Happy Holidays” instead of “Merry Christmas.” 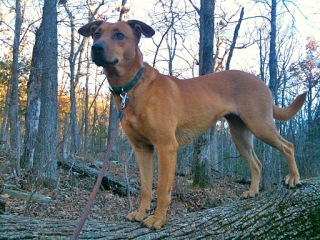 I snapped a couple of great photos along the way.  It was magic hour, so the light was amazing. So was my dog, who is quite clearly in charge of the world in the photo at right.

It’s a short hike, so before long I wound my way down where I was obviously supposed to cross a small stream/dam and get back to my car, a mere 30-40 feet away.

However, due to some heavy rains, the stream/dam was, well, if not quite a raging river, at least an impressive brook.  I stood there for 10 minutes, dog patiently at my side, trying to figure out if I could cross without tumbling into the water, which, a few feet downstream, poured over a 20 foot high spillway.  There was a lot of physics going on in my head, mixed with some statistics, and the basic answer was “there’s probably a 1 in 4 shot that you’ll be able to step on that pointy wet rock, leap to that pile of sticks that might be solid, after which you’ll have vault over that rushing water into the mud, and hope you don’t miss.”  I didn’t like those odds, so I made like a pioneer and followed the river downstream, searching for a better place to cross.

Remember how I said it was magic hour? After magic hour, it starts to get dark, real fast.  As I traveled further downstream, and further away from my car, I honestly started to wonder if I could make it back around the lake before nightfall.  And if I couldn’t, what then?

Eventually, I found my way to a spillway that had about 6 inches of slow moving water pouring over it, and I bit the bullet and waded in.  On the other side, I gave fleeting thought to scaling the hill, but instead decided to try the trail again, even though it was going in the direction I didn’t want to be going.  There, I found a fence, climbed through the mud under it, and voila!  There was the road.  Blessed, blessed road.  Not the way the trail was supposed to end, but it would do.

Slosh, slosh, back to the car, Sadie trotting happily along as if we hadn’t just narrowly escaped spending a night in the woods.

What’s the moral of this story?  Probably the same thing moms always say when kids leave the house; dress in layers (I did), tell someone where you’re going to be (I did), watch where you walk (I did), and try not to fall into the river.  Sound advice, I’d say.

PS: The info on the website for the Lake Wilson Trail said “use caution when crossing the spillway portion of the trail.”  No kidding.