Astute readers will note that Part II of the Grand Colorado Adventure has not been blogged upon yet; never fear, it’s coming.

However, I feel the need for a little rant. 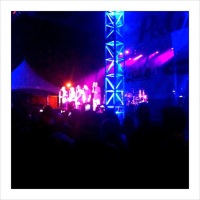 Last night, I attended a free performance by Huey Lewis and the News, one of my favorite bands from childhood.  In the mid-80’s when their albums Sports, Fore and others were popular, my parents were listening to them, and so was I.  They were my first live rock concert.  At my brother’s wedding recently, “The Heart of Rock & Roll” was on the wedding mix, and the DJ was befuddled, as were most of the wedding guests, who I guess didn’t groove to Huey’s raspy voice and rockin’ tracks in their youth.  However, the 7,000+ people crowding the parking lot last night to see these aging musicians got it.  I’m just sad that they didn’t appreciate it more.

Let me say again that this concert was free.  No cost to get in.  For those of you out there who might not understand the math, that means that someone paid the artists fees, travel costs, production fees for that big ‘ol stage that sprung up on the asphalt, and then opened the gates. There’s a lot of free music out there these days; concerts in the park, at bars, festivals, etc.  I could go on for hours about how I hate that we’ve come to expect music for free, and get mad when we have to shell out some cash for it.  But that’s a rant for another day.

Two things jumped out to me last night.

1.  About 5 minutes before the show ended, as Huey was winding up his encore and teasing the crowd about what song he was going to sing, he made one last final plea (and it was a plea, more than a little desperate) for people to buy his new album.  Clear as day, the woman behind me said (I’m paraphrasing):  “He’d BETTER not play one of his new songs right now.  I want an OLD song.”

2,  As we walked out of the parking lot, the ground was covered in crushed beer cans.

Number 2 is easy to lament; we’re slobs.  If a trash can isn’t in sight, we figure, “hey, that’s their problem,” and chuck our trash onto the ground.  Oh, there are just so many parallels for this small action in how we treat our world these days, but lest I be accused of being a liberal communist who wants to destroy industry by cleaning up our air, I’ll move on.

It’s Number 1 that truly gets me a’ponderin’.  Last night, the crowd tolerated the band’s new music.  I’ll admit I wasn’t as excited to hear that music as I was the old hits that I remembered from past, but I enjoyed them, and thought they lent a nice feel to the evening.  But toward the end, I heard rumblings from more than just the lady behind us.  There was a feeling of “I didn’t come here to hear new music.  I came to hear the songs that are familiar to me.”  Huey himself zinged this sentimentality by lamenting, before they sang Power of Love; “Who knew, 25 years ago when we wrote this song, that we’d have to sing it every night of our lives?”  Can you imagine that?  You’re an artist, you’re on the road, and you have sung the same song every show for a quarter of a century.  That tenacity, and the ability to make it sound good each night, amazes me, much as the ability of a Broadway actor to perform a role 8 times a week, week after week after week.

At the risk of being too intellectual, I think this phenomenon, which has existed ever since live performance became a thing, says something about us as a people.  We crave what’s familiar.  We crave what’s safe.  The new stuff is interesting, but it doesn’t touch a chord inside us.  In fact, when it comes right down to it, we merely tolerate the new stuff. Oh sure, there’s that self-identified “new music” crowd, but I’ll bet even they beg their favorite bands to play the hits. Sadly, I think this mentality translates into politics, movies and social change, too.

Still, though, I have to give props to musicians like Huey Lewis and his band for trying, even in the face of our laziness, to create something “new.”  Maybe someday a Huey cover band will play one of the songs on his 2010 album.  It’s a long shot, though, when the Heart of Rock & Roll is still beating.  🙂