…and I finally figured out why.  I must have a steaming hot ass.”
-Steve Martin, live at Walton Arts Center.

He played with the Steep Canyon Rangers, a terrific band in their own right, but I’ve gotta admit the only reason I went was to see Steve on my stage (yes, I know, it’s the community’s stage, but sometimes, I just wanna be greedy, ok?).  Lest I forget all the great details that made the show so special, here they are in no particular order.

All 6 musicians came out together, and I was surprised that Steve Martin was in a suit.  I expected less formality for a bluegrass/banjo show.  But I like it.  It shows respect.

The first challenge for any touring artist is to get the name of the current town right.  He hesitated a little, but got there eventually.  FFFFFayetteville welcomed him with a rousing cheer, though it wasn’t as lively a crowd as I’d have liked.  My peeps in the balcony were NOT the clap-along types, to my chagrin. 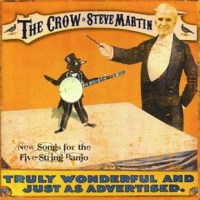 Many people were worried that Steve would insist on treating this as a “music” show, and not give us some of his comedy.  Not to worry, folks.  He started off by saying that it was his lifelong dream to play bluegrass in Fayetteville.  And we were off.

The first sense of whimsy we got in the show (one long set, no intermission) was a kids song about being Late for School – I hugely enjoyed that.  Before that, though, Woody, the guitarist for Steep Canyon Rangers, opened his mouth and sang, and wow, I got shivers.  His style is too country for me, but that boy has a voice.

Favorite moment of the show?  It’s a tie.  Here’s the first.  After joking earlier that the nice thing about traveling with a bass in the band is that you can use it as a fridge, Steve left the stage to give SCR a few songs on their own, but not before asking Charles, the bass player, for a beer.  Charles promptly turned the bass around, removed a panel, and fished out a brew.

Later, we got a taste of SCR’s vocal talents with an amazing acapella piece, after which Steve quipped “if you guys would learn to play your instruments with that song, it’d be amazing.”

I’ll admit I don’t know much about bluegrass songwriting, but it appears Steve Martin is a good writer.  One of my favorite musical moments was a series of three songs before which he asked us to imagine being on a boat in a Monet painting, riding a horse, and running into some Irish dancers.  The transitions between these imaginings were left up to us.  The first piece was my favorite – a soothing (if that’s possible with a banjo) tune that indeed felt like I was drifting in a pastel/oil paint world.

2nd favorite moment?  After a fun banjo/fiddle tribute to Steve’s dog, Wally, which segued into the full band back on stage playing together, a white lab appeared on stage to the collective “awww” and laughter of the crowd. I still don’t know who the dog belonged to, but it was a great moment.

Oh wait, I have a 3rd favorite – the atheist song.  Awesome.

The end of the show fell a little flat until the Orange Blossom Blues, which rocked the house.  I’m losing the order of songs already (despite Steve’s I-Pad set list which he claims now makes him “too big to fail”), but there was a fiddle feature in there somewhere that absolutely blew the roof off – I think the fiddle player broke all of the strings on his bow.  And the bands encores were great, including the final song – King Tut – that had the audience (finally) on their feet.

What a fun night.  Hard to believe I started the day ankle deep in rain and soaked to the skin at a soggy mess of a Race for the Cure.  But I got great music, a full house, the requisite overpriced t-shirt, and a tasty post-show meal with a friend.

Life really is sweet sometimes.  And I’m not saying that as a marketer for Walton Arts Center.  I’m saying it as me.